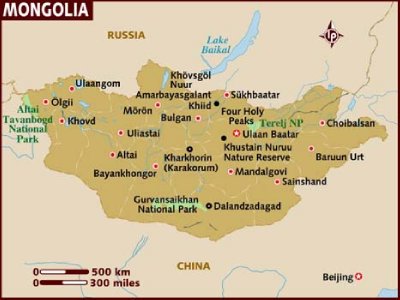 After the lake we got back to ulan ude and were hoping to catch a bus to ulanbataar which is the capital of Mongolia. We tried so many times to book bus tickets on line which was impossible and a woman at our hotel told us before we headed off for lake Baikal that we could buy tickets on the bus BUT that was not the case. We called 3 tour agents in ulan ude and they all said the bus was fully booked for the next 3 days and the problem was that our Russian visas were expiring the next day so we had to get out. Russia isn't a place you want to overstay your welcome.
So after being told that we had to take a local bus/taxi to the Russian boarder than hitch a lift over the boarder because you can't cross on foot then take a local Mongolian bus the rest of the way we had very little sleep that night worrying about it.
When we got up the next morning we thought we should head to the opera house where the ulanbataar bus leaves and try our luck.
Well we were in luck, 2 people had not showed and we got a seat!!!! We were the happiest people ever that morning.
Besides for a girl from Slovenia, we were the only tourists on the bus but even though we could only communicate through sign language everyone was very friendly to us.
We paid 1000 Roubles each and we're told it was a 12 hr journey. there is no bathroom on board but there are long drops that we had to use along the way. All my wet wipes were definitively coming into use and I got good at blocking my nose at the same time as squatting, the stench and flies we're quite something!
We had only had about 3 hrs sleep the night before and we weren't worried because we had so much time to sleep on the bus but that was not the case, it was incredibly bumpy that we nearly broke our necks by sleeping. Even with a neck pillow it wasn't possible, the roads and potholes are terrible but the driver seemed to know his bus and the roads so well that it was OK.
The Russian boarder town of kyaktha is Only 235kms from ulan ude and ulanbataar is only 273km from there but it took us 14hrs in total to do the 508kms. Besides for the millions of pit/toilet/smoke stops it was the border crossing that took 4 hrs. The bus got priority so who knows how long it takes by car! It is the most inefficient most overboard crossing ever and makes crossing over from SA to Swaziland a piece of cake. Every passenger has to offload their luggage on the Russian side and then go through security checks and customs and then put the bags back in the bus drive over and do it all over again on the Mongolian side. Ridiculous! However the train is approx 32hrs... 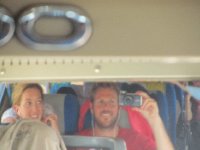 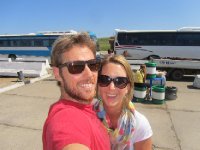 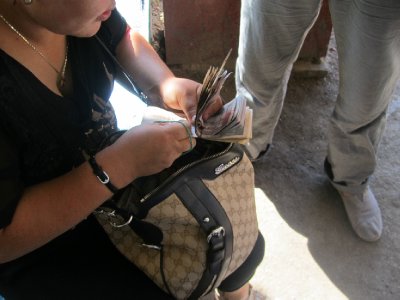 Finally we arrived at Ulanbataar and after walking around In the dark for ages and grabbing some dinner we got to our hostel at 12am exhausted. we only payed 30usd for a double room in the hostel which was a great improvement and very reasonable compared to Russia.
After a good nights rest we headed out into the town to sort out our next couple of days in Mongolia and explore the city. Ulanbataar (UB) is Mongolia's capital and the largest city in Mongolia. The population of Mongolia is only about 3million and it feels like everyone lives in this one city. The roads are SHOCKING and it's a but run down in some aspects but on the other hand it has big modern sky scrapers so you its a bit of everything.
There are quite a few "western" places to go and loads of expats living in the city. Lots of Aussies living here because Rio Tinto the mining company has a huge office here. We hung out at the chinggis khan Irish pub with all the aussie expats on the Thursday night.
Byron is obsessed with chinggis khan (he says that's will be our son's name one day) hence the fascination to visit Mongolia so it was a Very exciting moment to see the large chinggis khan statue in the parliament building in sukhbaatar square. 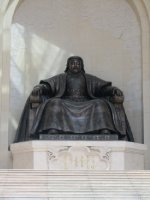 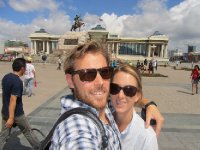 Every time you walk anywhere in UB you risk your life, the traffic is hectic and the cars do not wait for any pedestrian to cross the road so I'm not sure why they have zebra crossing because no one stops.
Nothing can be done on line here, you have to go to travel agents and tour companies to book anything so with our trusted lonelyplanet we headed off to see about 5 different companies and an "airmart" for flights. After getting a few quotes for Gobi dessert tours we were completely shocked. Most companies quotes around 1000 used per person for about 4 to 5 nights and that is not including your transport to the dessert,Four days driving or a flight. this was not in our budget so we decided to head out of UB for a few days to decide what to do.
off we went to a Ger Camp on the Tuul river about 70kms from UB. the tuul River is a river in central and northern Mongolia considered sacred by the Mongols. It is 704 km long and.is generally called the Khatan Tuul or Queen Tuul.

A Driver fetched us from our hostel and we headed out on the awful "tarred" roads until we hit dirt road, then we switched over and got into the biggest coolest truck We've ever seen. 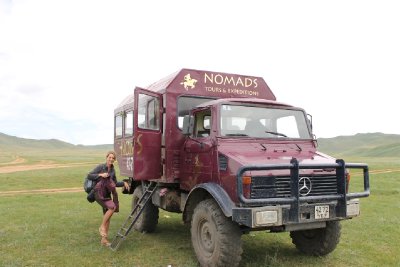 all of a sudden we were out of the city and in the middle of beautiful rolling hills. the Ger camp was set on a hill with a lovely view of the river and mountains.
We Spent 2 nights in this lovely ger camp where we did archery, road mountain bikes, went for lovely walks and went on an incredible horse ride over the mountains. I am petrified of horses but since Mongolians are supposed to be the best horsemen in the world so I figured this was the place to try. the horseman, Batar, was amazing and led me the whole way so my white horse wouldn't go off and gallop too fast. Byron on the other hand was fearless and went galloping off. 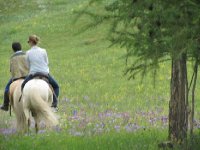 On the horse ride we stopped off at the horseman's home and he gave us traditional Mongolian yak tea and we tasted a local snack which was dried milk. after one bite I put it in my jacket pocket and pretended it was Delicious!
There were a few other English speaking tourists staying at the camp so we had some great meals and chatted to the first English travellers we have come into contact with. All round a great introduction to Mongolia! 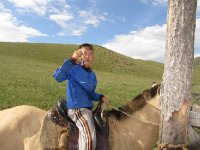 On our way back to UB, the driver took us through the river which went up to the truck's windows and was flowing really fast. We got dropped off at another hotel where we swam in the lake and had some lunch. The hotel told us we could take a local bus back to UB but while waiting on the side of the road with our backpacks and car pulled up with 4 people in it already and offered us a lift. We figured it was only about 20kms so we squashed in and hitched a local cheap ride back to UB to try sort out the dessert tour! 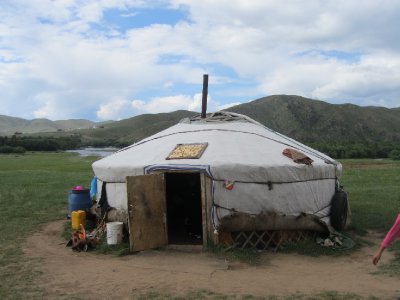 Posted by karenandbyron 06:27 Archived in Mongolia

Previous Next Table of contents

Comments on this blog entry are now closed to non-Travellerspoint members. You can still leave a comment if you are a member of Travellerspoint.

If you aren't a member of Travellerspoint yet, you can join for free.